Update  – I no longer use Paula’s Choice C15 super booster. I don’t know if they changed their ingredients or if something changed with my skin but it irritates my skin and makes it red/blotchy. I also feel a burning sensation immediately after applying it to my skin. This all began about two months ago and prior to that, I had no problems. So YMMV.

This is a stand-alone review for the Paula’s Choice C15 Super Booster. I also updated my  my post comparing several brands of Vitamin CE serum with photos of what happens when you refrigerate them.

I bought the C15 serum because my favorite Vitamin C serum was discontinued. I have a like/hate relationship with Paul’s Choice** and would prefer to use any other brand…except well, Skinceuticals is just too expensive and their patent doesn’t expire until 2025. 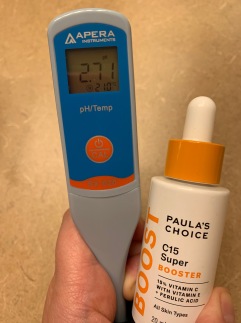 First, I have to admit that Paula’s Choice C15 Super Booster is the reason why I bought a pH meter. I used my pH strips and thought the pH level looked really low compared to the advertised pH of 3.0…like perhaps so low it would cause irritation. But I am okay with using a Vitamin C serum with a pH of 2.71.

I don’t have any complaints. I mostly use Vitamin CE serums as an aging preventative and to fight free radicals.  So don’t expect it to do things like lighten dark spots (I use Skinceuticals phyto+ for that). I’ve read on other blogs/websites/maybe magazines, too that your skin needs Vitamin C in order to produce collagen but I’ve always assumed that meant within your body, not topically on your skin.

It didn’t make me break out or cause any redness or irritation. But I also can’t say it made my skin look brighter or clearer or glow-y. I’m not the best with smells but it doesn’t bother me or linger. The texture to me is like water without a lot of slip. I will continue to use it.

Awhile ago, I wrote a post about refrigerating CE serums since they tend to oxidize quickly. Paula’s Choice C15 serum comes in a .6 ounce size bottle (not 1 oz like most other brands) and has an air-restrictive stopper at the top of the bottle so those things should help. But  I still wanted to see what happened when I refrigerated it. Especially because when I began doing this in February, I only used it once a day in the morning. This is because at night I was using a tretinoin product that included Vitamin C. About a month ago, I had to switch to a tretinoin without Vitamin C so now use C15 twice a day.

Here are the February, April, and May photos side by side. I think they all look the same. Note that for May, I had to pour the remainder of my C15 into a small, sample-size bottle. I didn’t have enough left for the original dropper to pick-up. This is my one BIG complaint about her dropper bottle packaging. When there is a little left (i.e., several days worth), I can’t get the dropper to pick it up. But if I pour it into my hand, so much comes out quickly that a few days worth of product is wasted. This doesn’t happen to me with dropper bottles from other brands. 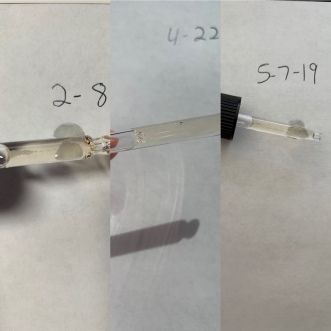 If you use the Paula’s Choice C15 Super Booster twice a day, it might only last 1-1.5 months so you’d be okay not refrigerating it. I just purchased a second bottle and will not refrigerate it and post photos and an update in a couple of months.

*THE INGREDIENTS LIST MAY OR MAY NOT BE ACCURATE DEPENDING ON THE SOURCE OF THE LIST AND MANUFACTURER UPDATES/CHANGES.

**I like/hate Paula’s Choice because I think her reviews of other brands’ products is just really good marketing. I’ve tried a lot of products from other brands that she has positively reviewed. Almost all of them have been DISAPPOINTING. Now, if I read a review where she doesn’t like the product, I’m more likely to try it because I usually like those products. I know lots of folks love PC but I’ve also tried basics like cleanser/moisturizers from her line and they haven’t worked out well for me.